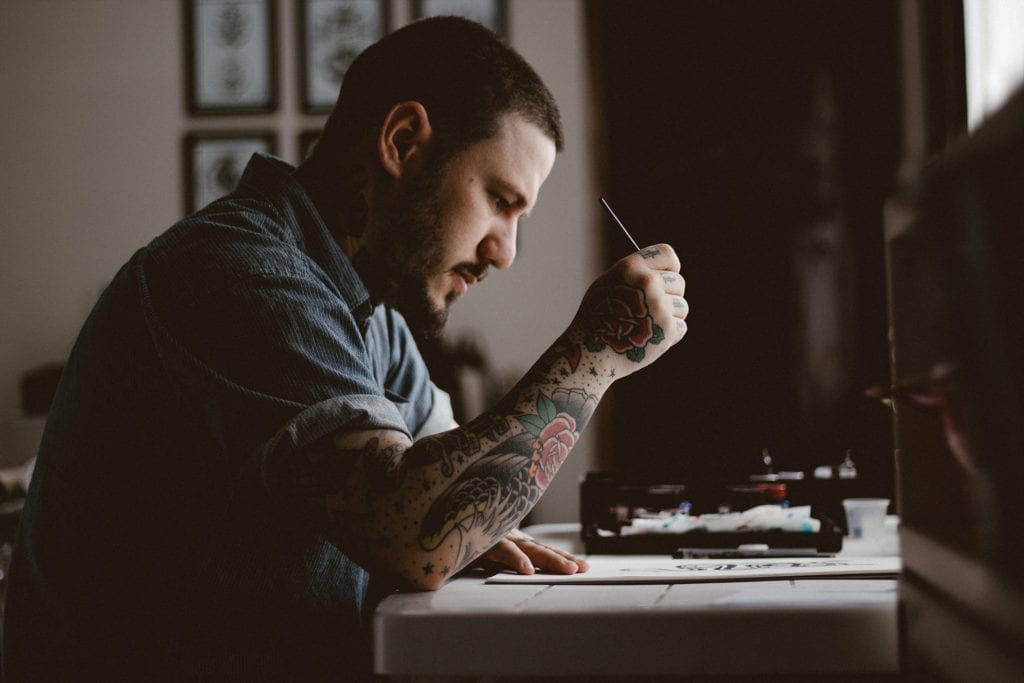 Many literary writers say that screenwriting does’t represent real writing. Television carries even less merit in their eyes. I had a creative writing professor in college who would cringe every time I brought up The Sopranos or Breaking Bad, or even The Wire. She represented an anomaly in the creative writing department, as most of my professors loved and respected storytelling in all its forms. I couldn’t understand why the narrative arcs of these well-respected series didn’t floor her. She just dismissed them. Maybe she never watched them. This professor saw writing for the screen as a lesser art form for some reason. And while I do believe that “the book is usually better,”—except in the case of Frank Darabont’s The Mist—screenwriting definitely has some major advantages over traditional prose fiction writing. In my experience, both represent tools to achieve an end, and that’s telling a powerful story. Using The Mist as an example, let’s look at Stephen King’s comments on Frank Darabont’s film adaption of his story:

“When Frank was interested in The Mist, one of the things that he insisted on was that it would have some kind of an ending, which the story doesn’t have — it just sort of peters off into nothing, where these people are stuck in the mist, and they’re out of gas, and the monsters are around, and you don’t know what’s going to happen next. When Frank said that he wanted to do the ending that he was going to do, I was totally down with that. I thought that was terrific. And it was so anti-Hollywood — anti-everything, really! It was nihilistic. I liked that. So I said you go ahead and do it.”

That writing professor would most likely invalidate my argument, deeming King’s work as “genre fiction,” but ignoring that fact, let’s really think about King’s comments here. He’s fine with a filmmaker changing his story for the screen. Why is he okay with this? Because it has meaning. He deems it “nihilistic.” “Anti-Hollywood,” even.

But truly, I don’t think Darabont’s ending would work as well in prose form. So we’re on the same page, take a look at the scene here (major spoiler):

A talented writer can make anything work, sure, but there’s something to appreciate about watching the pain unfold before one’s eyes. (I’m sick, I know). If we were reading this as narrative description, there’d be a voice in our heads explaining the action to us. No matter how many fragments or experimental punctuation uses the writer would implement to convey the emotion and panic, there would still be a voice, a narrator that distances us from the action unfolding. For emotionally-resonating scenes like this one, a visual portrayal serves to dumbfound and shock the audience, giving them a moment of pure awe and mental silence unencumbered by the separation that a narrative voice inserts into a story.

So, with that as an example, here are 5 advantages screenwriting has over prose:

How to write a voice-over in a script? Just add (V.O.) after the character’s name.

Prose fiction is a singular storytelling medium. What I mean by this is that the storytelling techniques are asynchronous in nature, with one line of text conveying action and dialogue. There exists no effective way to combine multiple auditory or visual occurrences. For example, say you had an argument taking place in a kitchen among a loud Italian-American family. Both the prose and script versions of the dialogue wold look pretty similar with dashes and interruptions. But the screenplay allows for another level of storytelling. This provides layered conflict.

To add commentary in the prose version, whether it be third-person omniscient, first-person, or otherwise, the writer must take the reader out of the action.  Even if it’s only for a moment, and not an extended narrative commentary, the audience still has that split second when they’re mentally distanced from the events taking place.

With screenwriting and filmmaking, a voice-over can add this commentary to the action simultaneously. The family’s argument builds in intensity, while at the same time, the teenage son addresses the audience, telling them via voice-over how embarrassed he is by his family. A silly and trite example, but it shows that screenwriting and filmmaking allow for multiple levels of characterization and conflict to occur at once, whereas traditional prose writing generally handles them asynchronously. For this reason, filmmaking provides a higher level of engagement.

Juxtaposing images serves as another way to enhance storytelling and conflict. In a book or short story, an author doesn’t have the ability to juxtapose imagery in real-time. Yes, a prose writer could effectively describe two sets of images one after the other, maybe even comment on them in some way that causes the reader to conjure them both in the mind at the same time, but again, it represents asynchronous storytelling.

The power of conflict can take several forms, such an immediate, in your face conflict or more of a slow burn. I would argue that written literature better takes the form of a slow burn conflict, even if the style is more animated and in your face. It’s tough to achieve that immediate “POW” that comes from a graphic match or powerful establishing shot.

Since we’re talking about asynchronous storytelling, screenwriting and filmmaking’s greatest example of this technique has to be crosscutting. Yale defines crosscutting as “editing that alternates shots of two or more lines of action occurring in different places, usually simultaneously. The two actions are therefore linked, associating the characters from both lines of action.”

If you read screenplays or screenwriting books from the 1980s, a lot of scripts employ the CUT TO: method. This style has pretty much gone by the wayside and is only used for extremely dramatic cuts, but it’s a useful technique to illustrate the concept of crosscutting. While one scene occurs…

Tom types at his keyboard.

…you CUT TO the next one at the same time:

Tom’s Boss and three of his coworkers sit around a conference table. One coworker rolls his eyes. Tom’s Boss taps his fingers on the table.

Where the hell is Tom?

A bead of sweat drips down Tom’s forehead as he hunches over his laptop, hands pounding at the keys.

As you can see, we really don’t need the “CUT TO:’s,” but I wanted to use them to illustrate the example. Employing this technique in prose would definitely be experimental, requiring at least a few paragraphs to establish the technique with the reader (probably using white space to delineate the CUT TO: moments). The Ruins by Scott Smith does this effectively, but it does so via long, extended paragraph sections.

Again, film provides immediate building of tension, whereas most literature requires more of a build-up.

A successful film needs collaboration. Any story does, really. With prose, things like the Iowa Writer’s Workshop method of literary criticism can help critique a writer’s story from all sides. Basically the writer goes before his or her peers, and the peers relentlessly criticize the story’s flaws, with the writer not being able to say anything in rebuttal. It sounds awful now that I write it out, but it really does make for good criticism. It forces writers to see their story from others’ points of view without being given a chance to be defensive.

However, it’s not so great for active collaboration. While it does force the write to change his or her way of thinking, and it could possibly lead to new ideas in an author’s further revision, the criticism occurs in a vacuum. The writer must take this criticism and then go forth and make changes to the story in a separate time.

On the contrary, a writer’s room—the industry-standard way of developing television series—fosters active collaboration and conflict from all sides. Disagreements about narrative structure, a character’s motives, or even choosing a setting benefits from the onslaught of conversation and ideas.

Back during my undergraduate writing program, I was lucky enough to be part of an intimate discussion on creative writing with Dennis Lehane—author of literary works such as Shutter Island and Mystic River. He also wrote on HBO shows such as The Wire and Boardwalk Empire. It was probably a group of five or so writers who got to speak with him at my school.

One of the most interesting things he told me is that he believes a writers’ room to be the absolute best place for a writer to be, specifically for the reasons I describe above. It’s interesting to note how open Lehane has been to having his stories adapted for the big screen by directors such as Clint Eastwood and Martin Scorsese. He obviously respects the genre, and he’s open to collaboration.

Personally, I think this collaboration comes from the inherent format of the screenplay. Meaning, it’s a lot easier to punch up screenplay action and dialogue than it is to edit a prose narrative. Sure, writers can certainly insert their own voice and style into their scripts—borrowing techniques from literary fiction—but the end result still follows a standard flow and format. How to format your screenplay or write good dialogue in a screenplay becomes much more achievable when writers have a basic mold to follow.

Perhaps this is one area where prose grants more freedom, but I think the collaboration that the format fosters outweighs the benefits of style. In the end, a good script writer and a good prose writer share the same qualities.

There exists an entire community for screenwriting. There’s the WGA East and West, as well as countless screenwriting meetups. Screenwriters generally like hearing thoughts on their work, whereas literary writers are more protective.

See the layered conflict techniques described above. While it definitely has its flaws—just like any film or creative work does—the film adaption of Nick Hornby’s High Fidelity gives the the story added depth, with the audience being able to experience the real music while the story unfolds.

After all these arguments for why screenwriting has advantages over prose writing, literary fiction certainly does have its merits—many of which can improve the quality of your scripts and films.

Stay tuned for a post that shows why practicing traditional creative prose writing will improve and hone your storytelling ability.

5 storytelling tips from an award-winning producer